By Deborah Fields, B.Sc.Reviewed by James Ives, MPsych
A very severe headache might be mistaken for a migraine but there are some specific differences. However, they are triggered by different factors and people feel distinctive symptoms. What happens immediately before the patient experiences pain and during the attack can help in making a diagnosis. The tension headache, the most common kind and a migraine are compared to show how they impact the patient. 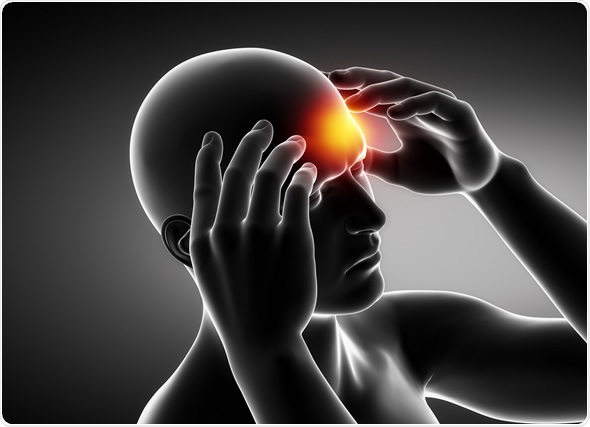 A tension headache gives the patient a feeling that an elastic band is squeezing his or her head. The headache is caused by the contraction of muscles between the head and neck. The dull pain, experienced across the head, is usually mild to moderate, although it can, in extreme cases, last for days. It more commonly lasts half an hour to a few hours.
A migraine, in comparison, tends to range from moderate to very severe throbbing pain at the front or the side of the head. It can be unrelenting and carry on for days and is accompanied by other symptoms sometimes described as the ‘aura’.

Symptoms before the attack

The tension headache gives no warnings before it happens.
A migraine gives warning signs or auras beforehand. Aura symptoms can be visual, auditory, psychological or physiological. This is due to changing neurological effects and reactions in the brain.
Visually aura symptoms can present as an alteration the patient’s perception by causing: wavy or jagged lines, flashing lights, dots, dark or coloured spots, stars or ‘sparkles’. These are usually accompanied by a sensitivity to light, which can exacerbate the problems.
Auditory symptoms include speech and hearing disturbances. These are usually accompanied by a sensitivity to loud or complex sounds.
Psychological symptoms include sudden change in mood, tiredness, thirst, hunger, confusion, feelings of fear, lack of control and memory changes.
Physiological symptoms include numbness, tingling, the sensation of spinning or vertigo, increased urination, weakness and fainting.
Different patients will have their own key symptoms which they may be able to recognise over time and will help them get themselves into a quieter and less visually active environment to cope with the symptoms.
There are two types of ‘non aura’ migraine, which can present without the above symptoms, but with a distinctive set of other symptoms. ‘Basiliar’ migraines are characterised with symptoms of fainting, double vision and loss of balance; and ‘familial hemiplegic’ migraines are characterised by reversible paralysis.

Triggers for a tension headache can be varied. Sudden stress and anxiety can start symptoms. Some patients may have depression. Poor posture can lead to musculoskeletal problems which then trigger the headache. Other causes may be tiredness, dehydration, hunger, smells, squinting, noise and sunlight.

Triggers for a migraine headache can come from many sources as well. Initially they are thought to start from chemical reactions in the brain. For some people a migraine can be prompted by hormonal changes.
Some women experience migraines around menstruation. Also the menopause can have an impact. It can make migraines worse in up to 45% of women who are going through it. Low blood sugar, hypoglycaemia, from not eating when we need to, can trigger migraines too.
Alternatively, eating a meal which is too high in sugar can have a negative impact. Other causes can be emotional anxiety, physical factors, exercise, medicines, contraceptives, medicines, dehydration, alcohol, computer screens and diet.

Symptoms during the attack

During a tension headache the patient would not have many other symptoms.
During a migraine, the patients will usually have symptoms beyond the head pain and will be unable to carry out everyday tasks. He or she may have to rest or sleep. The patient may suffer from continued aura symptoms, most commonly flashing lights or zigzags in their eyes, feeling nauseous or dizzy, loss of vision and feeling extremely tired. Some people also feel sensitivity to light and sounds.

Tension headaches may be helped by over the counter medicines and relaxation techniques. Occasionally a patient will see a doctor for an alternative treatment.
With migraines it is best to avoid them happening by being aware of the warning signs - auras. Knowing the symptoms can help sufferers to get to calmer environments with minimal auditory and visual sources which can reduce symptoms and keep the migraine from forming.
Medicines may also help to alleviate their severity once they have started as well as supplements, coloured lenses in glasses or contact lenses and alternative therapies.

Headaches can be either episodic (lasting a few hours) or chronic (lasting for days).
Migraines also usually last for a few hours or up to a few days.

Tension headaches affect more than 70% of some populations.
Migraines affect about 14.7% of the world’s population – approximately 1 in 7 people.