The co-operative model could connect people who really are friends and limit risky exposure.

Whatever it is, Facebook is the largest of its kind in the world. Having surpassed by its own measures the one-billionth-user mark in 2012 after only eight years in existence, it can boast that about one out of every seven people on Earth is a Facebook user.  (Just to get this out of the way, yours truly isn't one of them, but my wife is, and I trust her to tell me anything she sees on it that I need to know.)  Depending on your point of view, the fact that Facebook connects that many people—in principle, at least—is either one of the greatest communications achievements of all time, or a threatening sign that a private corporation now holds tremendous power over the lives of more people than most governments do.  This being an ethics blog, I'd like to look at the potential downside for a moment.
As thinkers all the way back to Aristotle have recognized, mankind is a social animal.  What others think and say about us is of vital, even fundamental, importance.  And if a significant part of one's social life takes place through media such as Facebook, social media become more than just one of a number of things you do, like gardening on weekends.  It becomes a near-essential part of your life, especially if you are younger.  A co-worker recently told me about a surprising result of a survey of college-age job seekers.  When asked if they would work for a company that prohibited them from using Facebook on the job, a substantial number of them said no.  As I haven't been able to track down the original survey, this may be an urban legend, but it rings true.
But the essential sometimes becomes the impossible.  I have known several people who have gotten so much grief from people commenting on their Facebook posts that they have quit using it altogether, either temporarily or permanently.  In the more extreme cases, otherwise responsible people have been forced out of jobs for actions which are entirely legal but go crossways to the opinions of large groups—or should I say "mobs"—who enact the online equivalent of a lynching.  As just one example, I can cite the case of Brendan Eich, developer of the JavaScript programming language, who became CEO of Mozilla Corporation in March of 2014.  Within days, an online tweet revealing that he had contributed $1000 to the California Proposition 8 campaign banning same-sex marriage led to an online shaming campaign by gay activists and ultimately his resignation, less than two weeks after taking the job.  And there have been rare but widely reported cases of cyberbullying (not necessarily involving Facebook) leading teens to commit suicide. 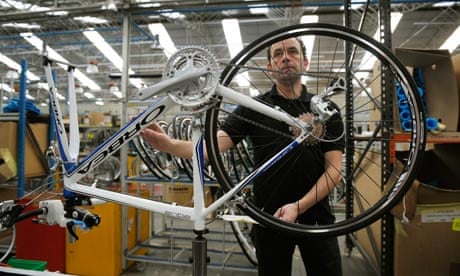 A Mondragon co-operative bicycle factory. Vincent West/Westphoto via The Guardian
Here's where Mondragon comes in.  In 1956, students at a Spanish technical college founded by a Catholic priest named José María Arizmendiarrieta formed a company that was eventually named after the town where it was based, Mondragón.  This company was not organized along the usual capitalist-ownership lines.  It was a co-operative enterprise and purposely incorporated the principle of subsidiarity, which is a concept from Catholic social teaching that says basically, if you can do it locally, do it locally.  From a humble beginning as a kerosene-stove factory, the Mondragon organization has grown to be one of the largest employers in the Basque part of Spain, and still substantially adheres to the principle of worker ownership, although not every single employee automatically gets a share of the company's profits (or losses, as the case may be).
In a recent issue of the journal of technology and society The New Atlantis, Baylor University humanities professor Alan Jacobs makes the following proposition:  "If instead of thinking of the Internet in statist terms we apply the logic of subsidiarity, we might be able to imagine the digital equivalent of a Mondragon cooperative."  That may require a little unpacking.
By "statist," I think Jacobs means that vast outfits like Facebook take on the nature of a nation more than a company. In fact, elsewhere in the same article he refers to Facebook as "a state—a Hobbesian state."  More unpacking:  Philosopher Thomas Hobbes (1588-1679) was famous for writing Leviathan, in which he argued that societies form political communities because the alternative was dog-eat-dog chaos in which life would be "solitary, poor, nasty, brutish, and short." In exchange for the modicum of protection that belonging to society provides, we agree to let go of certain kinds of freedom or autonomy—in the case of Facebook, you are trusting the organization with highly personal things such as photographs, death notices, and other pieces of yourself.
In the space I have left, I can only sketch out what a Mondragon-cooperative Facebook-like entity would be like. For one thing, the money it made would return to the users. For another thing, it would be a lot smaller than Facebook. And it might connect only people who are really and truly friends (or relatives), not just some random person who happens by your Facebook site and thinks you are clever, stupid, or whatever.
As far as I know, there is no fundamental technical barrier to making such an entity.  Right here in my neighborhood, people use some email-related software to send messages to others within a few blocks, and it's already done me a lot more good than Facebook.  The thing Facebook has going for it is the famous leverage of the network effect, first discovered by the telephone companies around 1900.  Because the addition of one more user to a network costs only one unit (say) and leads to everybody on the network having one more person to talk with, economists argue that costs in a network go as N and the value of the network goes as N squared.  While this might have been true in the early days of hardwired networks and has become a universally-assumed truism today, it is not clear to me that with modern software capabilities that old rule still applies.  Of course, real friends and relatives can be nasty too, but at least in the case of a Mondragon-like social media network, the damage would be much more limited.
A pipe dream?  Maybe.  But I think it's worth considering.
Karl D. Stephan is a professor of electrical engineering at Texas State University in San Marcos, Texas. This article has been republished, with permission, from his blog, Enginerring Ethics, which is a MercatorNet partner site. His ebook Ethical and Otherwise: Engineering In the Headlines is available in Kindle format and also in the iTunes store.
Sources:  Alan Jacobs' article "Attending to Technology: Theses for Disputation" (pp. 16-45) appeared in the Winter 2016 issue of The New Atlantis.  I referred to a website detailing six cyberbullying suicides at https://nobullying.com/six-unforgettable-cyber-bullying-cases/ and the Wikipedia articles on Facebook, Brendan Eich, and the network effect.

I remember reading years ago about the Mondragon co-operatives of the Basque region of northern Spain, and thinking what a great idea it was. Not having given them much thought since, I was intrigued to read Karl Stephan's reference to them in discussing alternatives to the global giant -- a virtual state -- that Facebook has become.

Dr Stephan, an electrical engineer, eschews Facebook (his wife does not, and tells him everything he needs to know about it) but belongs to a neighbourhood messaging network which he finds very useful. Taking up an idea from The New Atlantis, he says there is no fundamental barrier to making a Mondragon co-operative Facebook-like entity -- for a smaller network of people. It sounds like something worth exploring, at least for more personal sharing.