By Sally Robertson, B.Sc.Reviewed by Susha Cheriyedath, M.Sc.
Crohn’s disease is a condition that causes the lining of the gastrointestinal tract to become inflamed. Any part of the tract may be affected, although it usually occurs in the ileum (last part of small intestine) or the colon. The condition usually affects individuals between the ages of 15 and 40 and common symptoms include the following:
Individuals with Crohn’s may experience long periods of remission, where they have no symptoms or only very mild symptoms. This may then be followed by a “flare up” where symptoms return and can be particularly severe. For some people, symptoms may be absent for the majority of their lives, while others have a chronic and severe form of the condition where symptoms persist and never resolve. 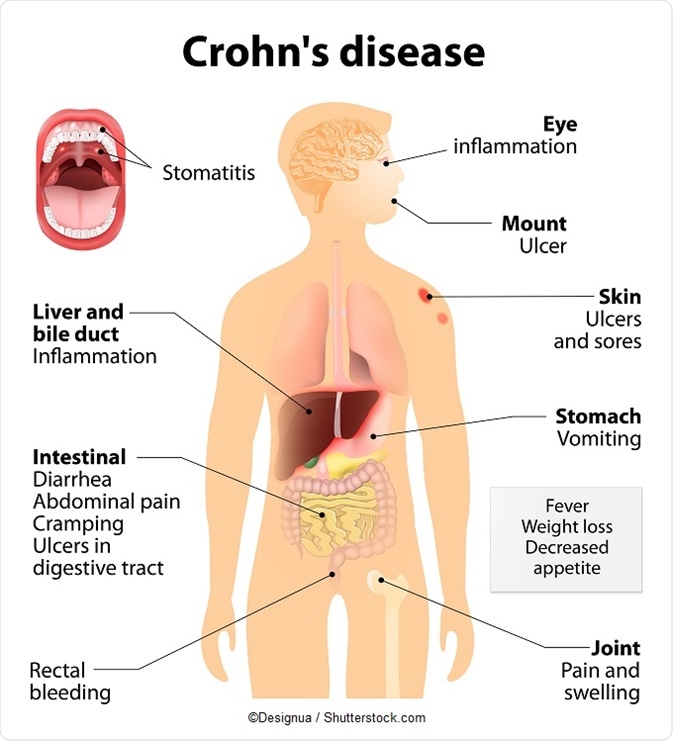 Crohn’s disease is named after the famous gastroenterologist, Dr. Burrill Crohn. It first became regarded as a medical condition when it was described by Crohn and colleagues in 1932. However, the first explanation of Crohn’s was given by Giovanni Battista Morgagni, an Italian physician who diagnosed a patient suffering from a debilitating and long-term disease that caused diarrhea.
Further instances were described by John Berg in 1898 and by Antoni Lesniowski in 1904. in 1913, Kennedy Dalziel also reported on the condition at a British Medical Association meeting and the paper was published in the BMJ.
Physicians examining patients with the condition could clearly see the inflammation in the digestive system and patients, especially young adults, who had the disease during the 1920s and 1930s usually experienced diarrhea, weight loss, and abdominal cramps.
In 1923, physicians identified 12 individuals at the Mt Sinai Hospital, New York, who also presented with these sorts of symptoms and in 1930, Dr, Crohn noticed that two of his patients had similar problems. In May 1932, Dr. Crohn and two colleagues presented an article on the condition “Terminal Ileitis,” in which they described the characteristics of Crohn’s disease to the American Medical Association (AMA).
The AMA then published the piece later the same year in JAMA, as a landmark paper entitled “Regional Ileitis: A Pathologic and Chronic Entity.” This happened to be a time when people in the field of medicine were particularly interested in novel discoveries.
In contrast to the 1913 BMJ paper by Dalziel, the paper by Dr. Crohn and colleagues was given significant recognition. Crohn happened to be the first author named on the paper (as a result of alphabetical order, rather than a reflection of contribution) and his name was used to refer to the disease itself after people read about the condition in a popular medical journal for the first time.