By Ananya Mandal, MDReviewed by April Cashin-Garbutt, MA (Cantab)
Crohn’s disease is essentially a disease that leads to severe inflammation of the lining of the digestive system.

Which part of the digestive system does Crohn’s affect?

The inflammation may affect any part of the digestive system, beginning from the mouth to the anus. However, the most affected area is the last section of the small intestine (ileum) or the large intestine (colon).
The Digestive System 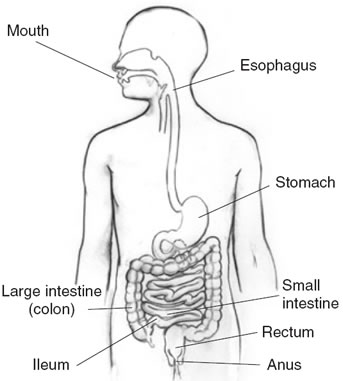 How does Crohn’s disease differ from ulcerative colitis?

While ulcerative colitis is also an inflammatory bowel disease, it affects the top layer of the lining of the large intestine causing ulcers. In Crohn’s disease, all layers of the intestine may be involved. Between two affected regions there may be normally functioning areas.

The commonest symptoms of this condition include diarrhea that may occur in episodes or for long durations along with abdominal pain, extreme fatigue or tiredness and abnormal weight loss due to malnutrition.
Large parts of the colon may be damaged leading to complications, such as narrowing of the colon. This may lead to bowel obstruction and even rupture of the intestines.
In many individuals, however, there may be little or no symptoms or the symptoms may be mild.  This is known as remission.
Periods of remission are usually followed up by flare ups when the symptoms increase in severity leading to complications and problems in daily functioning.

Who does Crohn’s disease affect?

Crohn’s disease affects both sexes equally and is usually inherited in families suggesting a genetic link.
Crohn’s disease can occur in people of all age groups. However, diagnosis is commonly made between the ages of 20 and 30.
People of Jewish heritage have an increased risk of developing Crohn’s disease and those of African American descent have the lowest risk.

The exact cause of Crohn’s disease is unknown. There are however several associations that have been made in connection with this condition.
One of the first and most important connections that are made is a genetic link. There are genes that may be associated with the condition and these genes may be inherited from parents. These genes raise the risk of getting Crohn’s disease.
Crohn’s disease is basically a disease of the immune system. The immune system goes overdrive in the digestive system leading to inflammation and damage.
Some previous infections may trigger an abnormal reaction from the immune system making a person susceptible to Crohn’s disease. Some environmental factors are also associated with Crohn’s disease.
The condition is more commonly seen in westernised countries, such as the UK and USA and is less common in poorer parts of the world, such as Africa. This indicates that diet and environment may play a role in causation of this condition.
Although smoking does not directly cause Crohn’s disease, smokers are seen to have more severe symptoms of the condition than those who do not smoke.

Colonoscopy and other imaging studies are used to diagnose this condition.
There is currently no cure for Crohn’s disease. Treatment is aimed at reduction of inflammation and associated symptoms of the condition.
Medications may be used to provide symptomatic relief. Most of these are immunosuppressants that prevent and correct the overt inflammatory reactions.
Around 60-75% of people with Crohn’s disease need surgery to relieve their symptoms. Surgery is used to repair damage to the digestive system and treat the complications.