By Sanchari Sinha Dutta, Ph.D.Reviewed by Jennifer Logan, MD, MPH
Corticotropin-releasing hormone (CRH), also called corticotropin-releasing factor (CRF), is a peptide hormone that activates the synthesis and release of adrenocorticotropic hormone (ACTH) from the pituitary gland. In this way, CRH affects our response to stress, addiction and depression, amongst others.

What is Corticotropin-Releasing Hormone?

CRH is a neuropeptide hormone that regulates neuroendocrine, sympathetic, and behavioral functions in response to stress. It consists of 41 amino acids and is secreted from the paraventricular nucleus (PVN) of the hypothalamus.
CRH was first identified in an ovine hypothalamus in 1981; later, the presence of CRH was observed in other species, including human, mouse, rat, pig, amphibian, etc.
CRH acts via 2 distinct G protein-coupled receptors, namely, CRHR1 and CRHR2. CRH1 expression is prevalent in brain areas responsible for sensory and motor control, such as the cortical mantle, olfactory bulb, hippocampus, amygdala, basal ganglia, medial and lateral hypothalamic nuclei, and cerebellum.
In contrast, CRHR2 is predominant in subcortical regions, including the lateral septum, bed nucleus of the stria terminalis, ventromedial hypothalamic nucleus, and medial and cortical nuclei of the amygdala. In the anterior pituitary, CRHR1 mediates the release of ACTH in response to CRH.
CRH belongs to a neuropeptide family that includes urocortins I, II, and III. These urocortins selectively bind both CRH receptors and, together with CRH, play crucial roles in controlling stress response, anxiety and depression, arousal, feeding behavior, energy metabolism, and digestive and cardiovascular function. 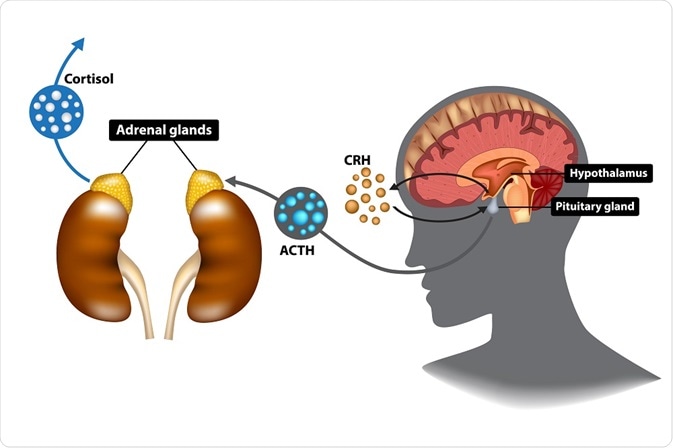 How does CRH regulate the neuroendocrine response to stress?

In response to stress, the hypothalamus releases CRH and triggers the release of ACTH from the anterior pituitary into the circulation. Subsequently, ACTH binds to its receptor on the adrenal cortex and triggers the release of stress hormones such as cortisol. This entire system is known as the hypothalamic-pituitary-adrenal (HPA) axis, which plays a crucial role in modulating fight-or-flight responses to stress.

Elevated CRH expression and subsequent increases in stress hormone levels in the blood is considered central to the pathophysiology of anxiety disorders. A recent study suggested that deleting CRH genes from selective neurons in the paraventricular nucleus of the hypothalamus can lead to reduction in the secretion of stress hormones (cortisol) and anxiety-related behaviors such as vigilance, suspicion, and fear.
In addition, a new population of CRH-expressing GABAergic neurons has been discovered that appear to be associated with anxiety-related behaviors in response to chronic CRH depletion. These neurons innervate the ventral tegmental area and reduce anxiety by increasing dopamine release.

CRH plays a vital role in drug addiction and withdrawal. Acute exposure to drugs not only triggers CRH-mediated activation of the HPA axis and elevation of stress hormones in the blood, but also increases the synthesis and secretion of CRH in the extended amygdala.
During drug withdrawal, activation of HPA axis tends to decrease, but synthesis and release of CRH from the extended amygdala increases significantly. This explains the manifestation of psychologic behaviors such as anxiety and depression during drug withdrawal.
CRH, together with urocortins I, II, and III, plays a significant role in excessive alcohol consumption. It is known that CRH promotes overuse of alcohol through generalized mechanisms that are associated with all forms of drug abuse. However, the role of urocortin I in alcohol-related disorders is more specific.
Urocortin I release from the Edinger-Westphal nucleus (parasympathetic preganglionic nucleus) is specifically associated with alcohol consumption because the inhibition of its action can specifically reduce the amount of alcohol consumption.
It is believed that urocortin I increases alcohol consumption by triggering reward-related functions, whereas CRH-induced alcohol overuse comes from the alcohol dependency due to chronic consumption.