By Lois Zoppi, BAReviewed by Jennifer Logan, MD, MPH
As the population ages, so too will the incidence of disease in people over the age of 65. Research into effective treatments for the management or prevention of such diseases are therefore urgently needed. 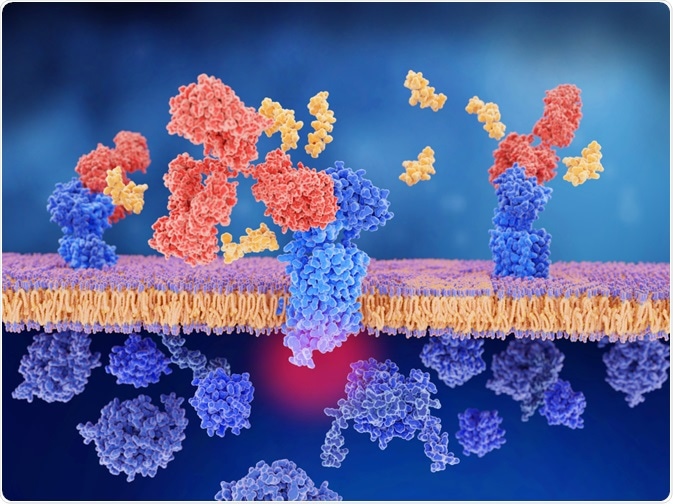 What is Alzheimer’s Disease?

Alzheimer’s disease is associated with the breakdown of neural pathways in the brain. Cellular dysfunction results from the development of senile plaques made of the amyloid β peptide (Aβ), which has been identified as the root of Alzheimer’s pathogenesis.
Anti-Aβ antibody treatments are the most advanced therapies currently available. However, some 2018 studies have shown that not every Aβ protein is as harmful as once thought. Intraneuronal accumulation of neurofibrillary tangles (NFTs) is also present in Alzheimer’s disease.
One current treatment for Alzheimer’s disease is acetylcholinesterase inhibition to increase the amount of acetylcholine in the brain; this therapy improves communication between cells. Another therapy, N-methyl-D-aspartate receptor antagonist (NMDA), is used to block the effects of large amounts of glutamate in the brain. Neither of these treatments provide a cure, however.
Currently, there are no effective treatments to modify the disease course, as Alzheimer’s disease often begins decades before a person manifests symptoms. Therefore, therapies aim to prevent the development of Aβ plaques or help clear them.

Research is ongoing into antibodies for the treatment of Alzheimer's Disease

Immunization treatments using antibodies have been developed to treat Alzheimer’s disease, but they are not clinically available due to severe side effects. However, passive immunization, which uses already formed monoclonal antibodies, has been used in an attempt to clear Aβ plaques.

This treatment has shown great promise in mice. However, studies also show that only about 0.1% of administered monoclonal antibodies reach the brain. The blood-brain-barrier, a semipermeable membrane that blocks access to many proteins, cells, and particles, is thought to be responsible.
It is thought that using bispecific antibodies(artificial proteins that can bind to two different types of antigen at the same time) could circumvent this issue if they are able to bind to a blood-brain barrier receptor and the targeted antigen. There are a number of these types of antibody treatments available.
One treatment option uses a fully humanized monoclonal antibody that binds to neurotoxic amyloid proteins in the brain and promotes their clearance. It has failed to produce substantial cognitive improvements in trials, however, despite its effectiveness in reducing amyloid brain plaques and hyperphosphorylated tau protein in cerebrospinal fluid. Trials were stopped early when side effects of vasogenic edema and microhemorrhages were reported.
A second treatment option is a monoclonal antibody that binds the Aβ peptides that create plaques in the brain. It has been used in conjunction with acetylcholinesterase inhibitors or NMDA in trials, but has not demonstrated improvements in patients with moderate Alzheimer’s.

What is the tau hypothesis?

Excessive or abnormal phosphorylation of tau proteins converts normal tau to paired helical filament tau (PHF-tau) and NFTs. Tau proteins form a family of six isoforms with sizes ranging from 352 to 441 amino acids.
All six isoforms are found, often in hyperphosphorylated forms, in paired helical filaments in Alzheimer’s disease. Hyperphosphorylation is caused by mutations that change the function and isoform expression of tau.
The process by which tau amasses without the presence of mutations is unknown, but may be related to increased phosphorylation, protease action, or polyanion exposure. Hyperphosphorylated tau creates insoluble PHF structures that damage cytoplasmic function and can result in cell death.
The tau hypothesis is currently one of the most popular theories concerning the development of Alzheimer’s disease. Drugs are being developed that target the processes involving tau protein, and trials are ongoing. However, this theory is not considered complete or definitive.

Familial cases of Alzheimer’s disease make up approximately 3% of all cases. The chance of developing Alzheimer’s for patients who have the genetic mutation for familial Alzheimer’s is 100%, Now, there are clinical trials involving monoclonal antibody treatments that target the beta-amyloid-forming plaques in the brain.
In other populations that have a high risk for developing Alzheimer’s disease, there are studies investigating monoclonal antibodies, active vaccines, and beta amyloid precursor protein (APP)-cleaving enzyme inhibitors, which stop APP from changing into neurotoxic types of Aβ.
Additionally, human studies have been carried out to investigate the safety and tolerability of an immunotherapy vaccine in patients with Alzheimer’s, as well as its effects on antibody response. Final conclusions about whether passive or active anti-amyloid beta immunotherapy can either delay or prevent the onset of Alzheimer’s have not been made.