By Sanchari Sinha Dutta, Ph.D.Reviewed by Liji Thomas, MD
Raynaud’s syndrome is a rare disorder characterized by reduced blood flow to the body’s extremities, namely, the fingers and toes. 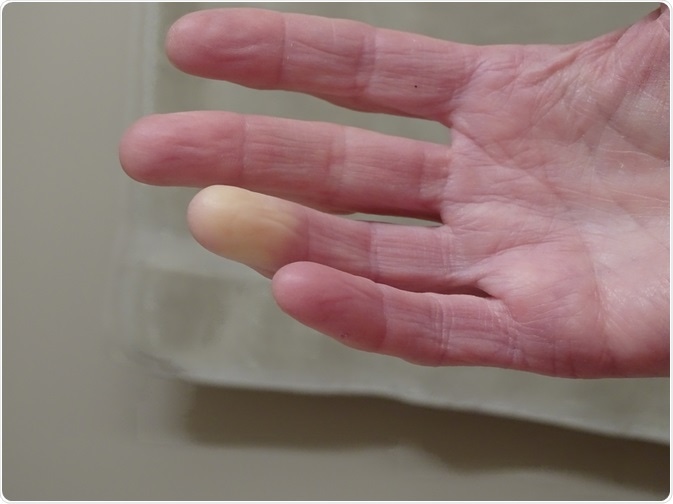 Barb Elkin | Shutterstock
Raynaud’s syndrome is characterized by narrowing of the blood vessels (vasospasm) in response to cold, stress, or emotional fluctuations. It is an episodic disorder, with a typical episode lasting for around 15 minutes.
Upon exposure to cold or stress, the skin turns white or blue due to a reduction in blood flow. Afterward, restoration of the blood flow results in reddening of the area and discomfort, such as numbness and prickling sensations.
Raynaud’s syndrome is categorized into two forms: primary and secondary Raynaud’s syndrome:

Although the exact etiology of Raynaud’s syndrome is not known, an excessive vasomotor response (a physiological process that controls the constriction and dilation of the blood vessel in response to temperature change or stress) is considered to be the major cause of this disorder.
An elevated vasomotor response may be associated with dysregulation of the nervous system that regulates muscle cells in the blood vessel responsible for its constriction and dilation.
When exposed to cold temperatures, blood vessels near the body surface constrict to keep the warm blood in the core body area. Similarly, in stressful conditions, surface blood vessels constrict to facilitate the fight-or-flight response. To some extent, these processes contribute to the development of Raynaud’s disease in response to stress and cold.

Diseases that affect blood vessels, such as atherosclerosis (plaque buildup in the arteries that supply the heart; Buerger’s disease (inflammation and thrombosis in blood vessels of the hands and feet); and primary pulmonary hypertension (high blood pressure that affects lung arteries)

Scleroderma (a rare condition characterized by hardening and scarring of the skin) is frequently associated with Raynaud’s syndrome. Other connective tissue disorders linked to this condition include lupus, rheumatoid arthritis, and Sjögren’s syndrome.

Carpal tunnel syndrome is caused by pressure on a major nerve in the hands, which results in numbness and pain. This makes the hands more susceptible to Raynaud's syndrome.

Repetitive work such as typing, or the use of vibrating tools, such as jackhammers, increases the risk of developing Raynaud’s syndrome.

Hand or feet injuries, such as wrist fracture, surgery, or frostbite, can lead to a reduced sensitivity to cold temperatures.