By Ananya Mandal, MDReviewed by April Cashin-Garbutt, MA (Cantab)
There are several investigations that may be used to diagnose tuberculosis. This may depend on the type of tuberculosis that is suspected. 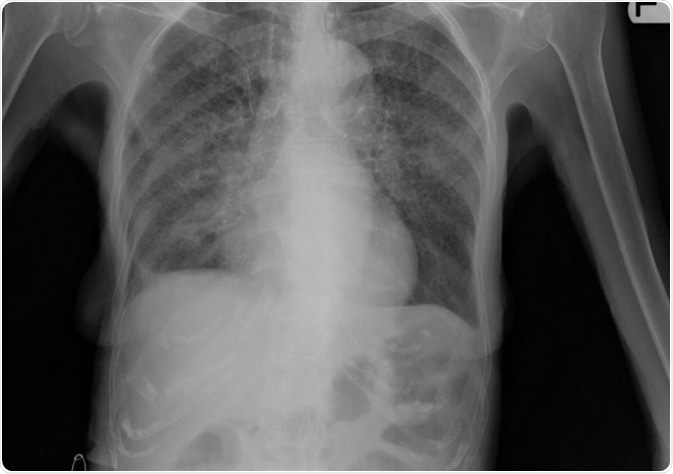 Image: Lung X-ray of patient with tuberculosis. Credit: Yale Rosen/ flickr.com. Shared under thelicense.
Primary tuberculosis usually appears in the central upper portion of the lungs with a pleural effusion or collection of fluid around the lungs. In severe disease there may be a picture like millet seeds over the X ray plate of the lungs. This is called milliary tuberculosis.
The phlegm or mucus is collected from the patient. It is placed onto a glass slide and stained with a special dye called the Ziehl-Neelson stain and then viewed under the microscope. The tubercle bacilli show up as tiny red thread like organisms.
For examination of sputum at least 3 spontaneous sputum samples need to be examined for culture and microscopy. Culture results may take time to come and treatment with anti tubercular drugs may be started on the basis of microscopy if there are symptoms of tuberculosis. Sputum is cultured on a medium called the Löwenstein-Jensen slope which takes 4-8 weeks due to slow bacterial growth.
Samples should include at least one early morning sample. In the case of children, or in those who cannot produce a sputum or phlegm sample, the washings of the bronchus and air passages are taken using bronchoscopy, lavage and gastric washings. These samples are then tested for the bacteria. Samples need to be taken before starting treatment or within 7 days of starting.

In patients with tuberculosis suspected outside the lungs several tests are suggested. These include:

Ruling out other diagnoses

Diagnosis that need to be ruled out while confirming tuberculosis include:-