By Liji Thomas, MDReviewed by Tomislav Meštrović, MD, PhD
An endometrial polyp is an overgrowth of the endometrial lining on the inside of the uterine cavity, most often found in women between 20 and 40 years of age. It contains no muscular tissue unlike a fibroid.
Again, while a fibroid originates from the muscular middle layer of the uterine wall, called the myometrium, and can therefore protrude outwards towards the outer serosal layer or inwards towards the inner endometrial layer, an endometrial polyp is always located within the uterine cavity. Their size varies from a few millimeters to centimeters, and they may occur singly or as multiples. The most common site for polyp formation is the fundus of the uterus.

Many polyps are asymptomatic. Most often, a symptomatic uterine polyp causes spotting or bleeding at irregular intervals - either in between periods (which is called intermenstrual bleeding), or as irregularity of the periods themselves (termed metrorrhagia). Bleeding can also ensue following sexual intercourse (called postcoital bleeding) or after menopause. Moreover, they may cause uterine cramping during periods, which is called dysmenorrhea, and some studies report infertility as a result of uterine polyps.
Approximately 40% of women with bleeding from the uterus who have not reached menopause may have endometrial polyps, and they are found in up to about 30% of postmenopausal women with abnormal bleeding. The risk for malignant transformation in an endometrial polyp is about 3%. 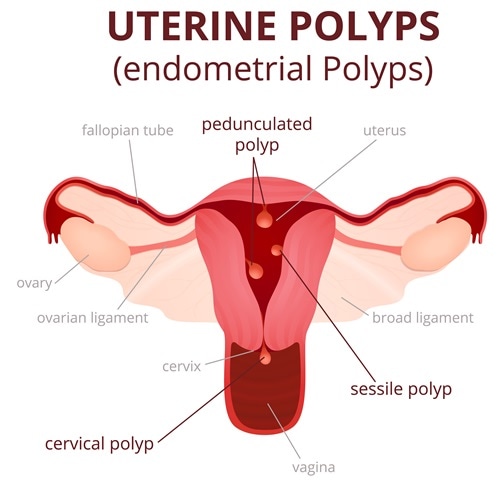 Women at increased risk for endometrial polyps are often:

While many endometrial polyps are diagnosed incidentally on imaging of the uterus for some other symptoms, others are suspected due to the presence of bleeding or pain. This may lead to examination of the uterine cavity using hysteroscopy. Other methods of evaluation may be used such as a Pap smear, examination of the cervical canal for a protruding polyp, a contrast examination called a hysterosalpingogram, an ultrasound scan of the pelvis, uterine curettage (scraping of the inner lining) or an endometrial biopsy. A specialized ultrasound called a hysterosonogram may also be performed.
However, diagnosis is by excising the growth and sending it for histopathologic examination. This will definitively distinguish these from uterine fibroids. Removal of the polyp is usually done by means of  a resectoscope, a slender instrument used to cast a wire noose around the base of the polyp, ensnare its blood supply, resect it, and retrieve it - all under direct vision. This can be introduced through the hysteroscope, thus avoiding the need for two separate procedures.
Recurrence rates are high, from 15-43% in premenopausal women, and this must be discussed with the patient. Follow-up and monitoring are essential. The use of an intrauterine device releasing levonorgestrel, such as the Mirena, or a surgical procedure called endomyometrial resection, are two pivotal steps recommended to reduce the risk of recurrence. The Mirena device can be removed when necessary to allow conception, making it possible to control conception as well as limit endometrial proliferation.
Again, further surgery is required in about half of women who request polyp removal because of menorrhagia. When removed, the base of the polyp must also be obtained because a third of malignancies occur at that spot. Endometrial damage must be limited to preserve the woman’s ability to conceive and carry a pregnancy successfully. If a polyp is found to be cancerous, hysterectomy is the only definitive mode of management.