By Ratan-NM, M. Pharm.Reviewed by Damien Jonas Wilson, MD, BASc.Eng.
Acute flaccid myelitis (AFM) is a medical condition characterized by muscular weakness and myelitis, which is the medical term used to describe inflammation of the spinal cord. It is a rare disease affecting the gray matter, which is the region of the brain responsible for muscle control and sensory perception.
AFM is classified as a sub-type or variant of transverse myelitis, which clinically presents with symptoms and signs that are typical of neurologic dysfunction in the sensory and motor tracts on both sides of the spinal cord.
Even though the disease is predominantly observed in older children (median age 7 years), AFM may also develop in adults as well.

Although no definite cause of AFM has been found to date, certain viruses have been associated with the development of this serious condition. Viruses, such as enteroviruses A71, West Nile virus and poliovirus, have been found to be potentially implicated in the pathogenesis of AFM. In the year 2014, an outbreak of respiratory illness associated with D68 enterovirus was reported in the United States. During this outbreak, a cluster of AFM cases were also found in Colorado and California.
The symptoms associated with AFM are usually found to develop after a prodromal illness.  However, the exact mechanism responsible for initiating the trigger is still unknown.  Sometimes the spinal fluids of the affected person are void of any traces of pathogens.

The symptoms associated with AFM are often similar to other neurological conditions, such as transverse myelitis and Guillain-Barre syndrome (GBS). This makes differential diagnosis of AFM difficult. However, certain tests and neurological examination may aid prompt diagnosis of the condition. 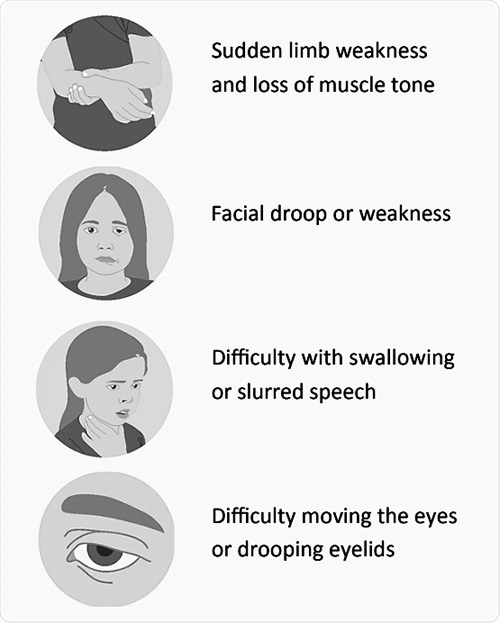 Typical diagnosis strategy includes complete physical examination, magnetic resonance imaging (MRI), cerebral spinal fluid (CSF) testing, electromyography or electrodiagnostic tests, and nerve conduction velocity tests. Respiratory tract samples may be examined for the presence of any causative viral component.
Lesions suggesting spinal motor injury are found in MRI scans. Motor neuropathy or neuronopathy are depicted in electromyography. Sensory abnormalities are not typically found in testing, because the myelitis is limited to exclusively the gray matter of the spinal cord.
Cerebrospinal fluid (CSF) tests in most patients depict pleocytosis or abnormal amounts of white blood cells. Proteins in the range of 19-99 mg/dL may also found to be present in CSF.
As per the Centers for Disease Control and Prevention (CDC), the diagnosis of AFM requires two criteria:
As the definite causative agent of AFM is not known, there are no vaccines to prevent the condition. Current treatment strategies usually involve physical and occupational therapies to manage the limb weakness. There is urgent need to establish the long-term effects of this rare disease, and research is directed towards this need, as well as to better understanding of the condition and its pathogenesis.