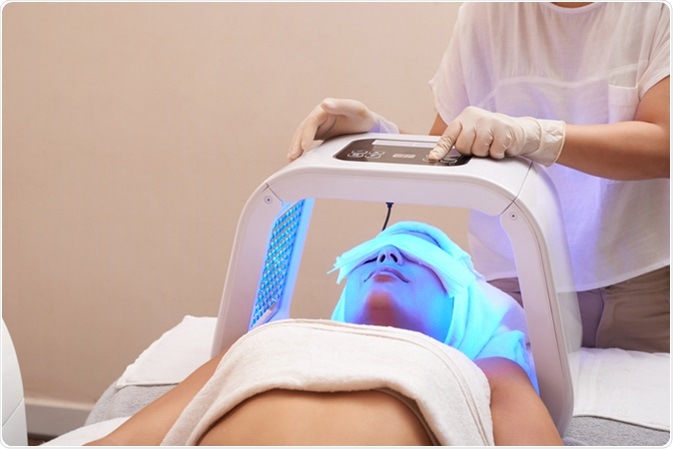 Cosmetologist setting LED lamp for color light therapy. Image Credit: Dragon Images / Shutterstock
Light therapy is one of the oldest modalities used to treat a variety of health conditions. The use of coherent light sources (like lasers) and non-coherent light sources (like light emitting diodes or LEDs) have opened new avenues in medical sciences. These light therapies have been used to treat a variety of medical conditions.
Infrared therapy involves the use of infrared radiation to produce local heat; whereas LED therapy is a non-thermal therapy used in a variety of dermatological processes, and wound healing. 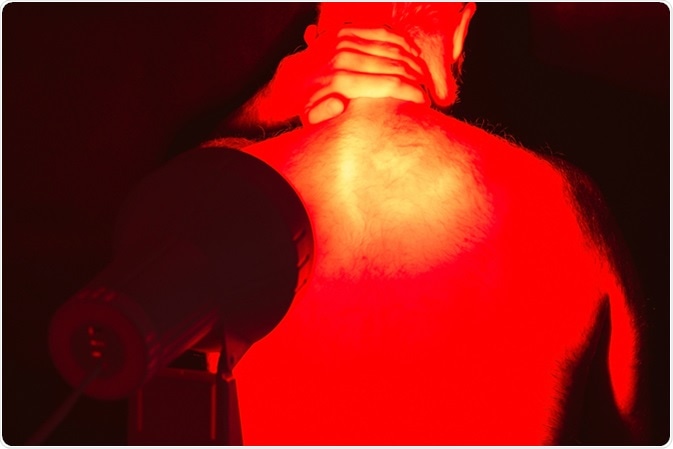 What are the Similarities and Differences in the Mechanisms of Action Between Infrared and LED Therapy?

LEDs comprise of complex semiconductors, which convert electrical currents into incoherent narrow spectrum light.
Each wavelength of light penetrates a specific depth of skin tissue and, hence different wavelengths of lights can be used to treat different conditions.
The photons emitted by LEDs are absorbed by chromophores like porphyrin and flavins present in the body.
In infrared therapy, light is thought to be able to penetrate approximately 3 inches into the body. Thus, it is possible to heat the body’s tissues from the inside, which helps in fighting infections, and promotes healing. Application of infrared light to body tissues causes the release of nitric oxide.
Nitric oxide is known to improve circulation at the site of treatment, which speeds up the healing process.
It is also known to stimulate collagen production, and it also stimulates the production of adenosine triphosphate (ATP), which ultimately provides the chemical energy needed to improve cell function.

The power output from LED is significantly lower than that of infrared, which tends to make it less invasive, and potentially less harmful to targeted tissues. LED phototherapy presents as a safe therapy compared to other thermal based dermatological therapies.
They do not cause thermal injuries, and hence safeguard the epidermal and dermal layers of the skin. It is also a noninvasive or painless treatment, and patients do not complain of any redness, or swelling with the treatment.
As infrared therapy involves the use of thermal energy, it is more likely to cause side effects. Side effects include thermal burns due to the overheating of skin tissues.
The overheating of skin tissues also impairs the skin’s ability to repair DNA damage, and thus makes the tissues more susceptible to mutations.
Thermal burns can be avoided by strictly following the prescribed therapy times. Maintaining safe distance from the infrared source can also help to prevent burns.

What are the Applications of Infrared and LED Therapies?

Both infrared and LED therapies have significant bodies of evidence backing their efficacy.
LEDs have been utilized in wound healing, acne vulgaris, psoriasis, cancerous skin lesions, and skin rejuvenation. The broad utility of LED therapy makes it a promising procedure for a plethora of medical and cosmetic applications.
Infrared therapies can help in relieving the pain, and stiffness that is typically found with rheumatoid arthritis and ankylosing spondylitis. They can also be employed to treat a variety of ophthalmic, neurological, and psychiatric disorders. Moreover, they can be used to stimulate the proliferation of certain stem cells.
Other applications include neural stimulation or direct activation of neural tissue and photoaging. They can also be used as anticancer agents. Infrared therapy can inhibit the proliferation of cancer cells and thus potentiate the effectiveness of chemotherapy.