By Hannah Simmons, B.Sc.Reviewed by Susha Cheriyedath, M.Sc.
Alzheimer’s disease is the most common form of dementia. It was initially described in 1907 by Dr. Alois Alzheimer when he noticed amyloid plaques in the brain of Auguste Deter, a patient with several cognitive impairment. We now know that this condition is characterized by the degradation of memory, language, behavior and other vital skills, which gradually deteriorate and lead to premature death. 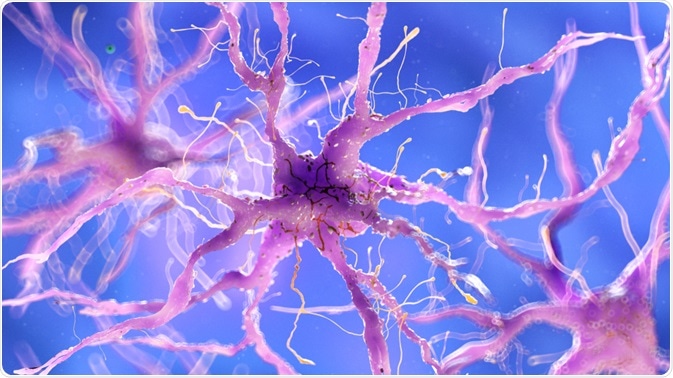 Sebastian Kaulitzki | Shutterstock
Alzheimer’s disease can be either sporadic or familial, with common mutations found in amyloid precursor protein (APP) and presenilin genes. The condition can be further classified based by the age of onset; early (less than 60 years of age) or late (over 60).
Extracellular and intracellular protein accumulations are observed within the brains of Alzheimer’s disease patients, which are thought to contribute to the progression of the condition. Two different forms of protein accumulation are typically observed; amyloid plaques and tau tangles.
It has been suggested that these proteins may prevent nerve cells from communicating, resulting in cellular death and loss of brain matter. This may ultimately result in the loss of brain function and contribute to the progression of symptoms.

The function of amyloid is not yet fully understood; however, it has been shown to contribute to several biological processes.
The amyloid plaques previously described are the products of amyloid-β (Aβ) accumulation. These Aβ fragments are generated from the processing of a precursor protein (APP), via amyloidogenic processing through the action of two enzymes (β- and γ-secretase).
Alternatively, APP can be processed through the non-amyloidogenic processing pathway by α- and γ-secretases, preventing the production of Aβ. It has also been demonstrated that these two pathways are balanced, with increases in one pathway leading to reductions in the other pathway. Excessive Aβ production leads to oligomerization and formation of the plaques seen in Alzheimer’s disease.

What is the amyloid cascade hypothesis?

The amyloid cascade hypothesis was initially suggested in 1992. This theory postulates that the initial event which triggers neuronal degradation in Alzheimer’s disease is enhanced amyloid-β generation and aggregation. It suggests that if the amount of Aβ generated is greater than the amount that is degraded, accumulation occurs, resulting in plaque formation, tau tangle formation, cell death, and the associated symptoms of Alzheimer’s disease.
Therefore, it has been suggested that boosting the non-toxic, non-amyloidogenic processing pathway or reducing the toxic amyloidogenic processing pathway may lead to less amyloid-β production and reduce the progression of Alzheimer’s disease. However, research into β- and γ-secretase inhibitors and α-secretase enhancers have shown that reducing the activity of these enzymes can lead to cancers and further neuronal dysfunction.

Alternatively, several other hypotheses have been suggested for the generation of Alzheimer’s disease. For example, the first theory was based on cholinergic dysfunction, suggesting that the observed symptoms were due to a lower amount of choline acetyltransferase and acetylcholinesterase activity in the patient’s brain.
Therefore, it is still not fully understood as to how Alzheimer’s disease is caused, why it progresses, or how we can stop it. However, many studies are currently underway in an attempt to identify novel forms of therapy.