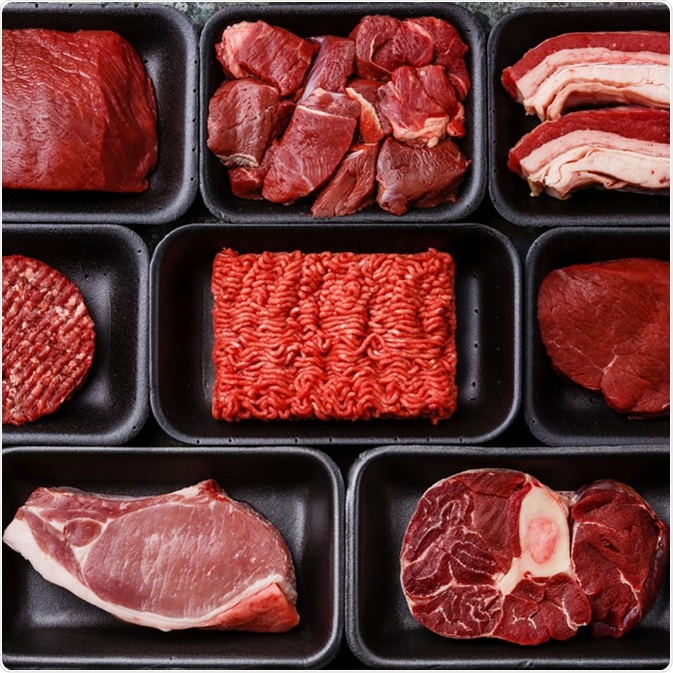 The study of diet-related disease risks is very important in order to establish associations between the two. In particular, red meat (e.g. beef, pork, and lamb) consumption is important as it has been shown to contribute to an increased risk of many different illnesses.
Processed red meat may have cancer-promoting effects due to the presence of nitrates and nitrites which can cause DNA damage. The nitrates and nitrites are converted into N-nitroso-compounds (NOCs) that covalently bond to DNA bases to form adducts, which effectively act as mutagens. Studies have found that colorectal cells exposed to NOCs undergo DNA alkylation leading to the mutation of genes involved in DNA damage control and proliferation. These include genes that encode RNA polymerase II and p53. Consumption of red meat-derived heme (the iron-carrying pigment that is associated with hemoglobin and myoglobin) can increase the risk of developing carcinomas due to its cytotoxic and DNA-damaging oxidative properties. The strongest association of red meat with cancer risk relates to colorectal cancers.
Studies performed on rodents have shown that a diet rich in heme increases the incidence of colon tumors. The carcinogenic effects of heme are observed mainly in the gastrointestinal (GI) tract as any heme entering the bloodstream is rapidly sequestered by hemopexin found in the blood plasma. Changes to the gut microbiota caused by dietary heme promote the hyperproliferation of colonic enterocytes which amplifies any other carcinogenic properties. However, the absence of these heme-induced effects in other carnivorous species has led to these hypotheses being questioned, and alternative explanations such as infectious agents in red meat have been evoked.

Higher red meat intake is also associated with an increased risk of developing type 2 diabetes mellitus (DM) and cardiovascular disease (CVD). It leads to an increased plasma concentration of C-reactive protein (CRP) which is an inflammatory marker. A population study in the US which assessed the effect of red meat on various biochemical and inflammatory markers showed that increased consumption of both processed and unprocessed red meats were associated with elevated plasma CRP and plasma ferritin concentrations. However, most of these relationships were mediated by an abnormal increase  in body mass index (BMI). Some findings from this study were non-significant in magnitude which suggests that the strong correlations between increased red meat intake and inflammatory disease development yet fall short of causality. On the other hand, reducing some red meat in the diet in favor of plant-based protein sources resulted in a healthier blood profile.

The benefits of red meat consumption

Red meat is high in iron and vitamin B12. Iron is a major component of hemoglobin in red blood cells, being the component that binds to oxygen in the blood. Iron deficiency can lead to anemia, which results in a lack of red blood cells, reducing oxygen supply to the organs and tissues. Vitamin B12 is a nutrient that helps keep the nervous system and blood cells healthy. A lack of B12 can cause symptoms such as tiredness, weakness, constipation, weight loss, and megaloblastic anemia (inhibition of DNA synthesis during red blood cell production). Nervous complications can also arise, which include numbness, tingling of the extremities, balance problems, depression, confusion, dementia, and poor memory.
While red meat can be part of a healthy lifestyle, overconsumption is detrimental to health; a steady balance must be achieved.

Reducing the consumption of red meat can have substantial health benefits; however, caution must be taken to avoid dietary deficiency of key nutrients (e.g. B12 and iron).  For men aged 18+ years the recommended daily iron intake is ~8.7 mg, women aged 18-50 need ~14.8 mg, and women aged 50+ need ~8.7 mg of iron. Reduced red meat consumption may be compensated by gaining iron from other food sources (such as beans, nuts, dried fruits, whole grains, and dark-green leafy vegetables). Any B12 deficiencies arising from the diet change may be alleviated by prescription vitamin B12 supplements.