By Ananya Mandal, MDReviewed by Sally Robertson, BSc
Fibromyalgia is a chronic condition that causes musculoskeletal pain, tenderness and stiffness in different parts of the body, as well as sleep disturbances and fatigue.
People often report that fatigue is the most bothersome aspect of fibromyalgia, since it can affect mood, concentration, memory and the ability to think clearly. Other symptoms include the following:

In some cases, symptoms begin following an event such as surgery, intense physical stress or infection. Severe psychological stress may also lead to symptoms. In other cases, symptoms develop slowly and a cause cannot be pinpointed. 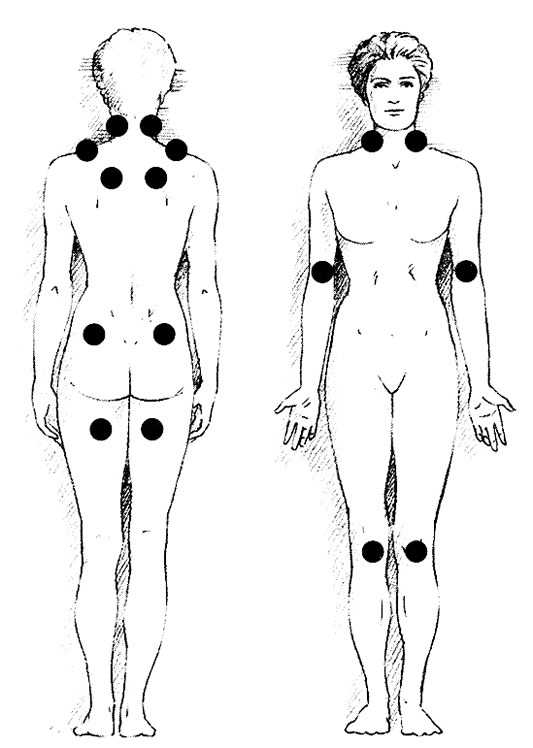 The pain tends to be widespread and felt as aching or burning sensations. It varies in severity, although it tends to be more severe in the most used areas of the body. The fatigue also ranges in severity, from tiredness and feeling drained, to complete exhaustion. The effects of symptoms varies between individuals, but many experience intermittent flare-ups where symptoms are suddenly exacerbated. Some individuals with fibromyalgia report that their pain intensifies when the weather is very damp, cold or hot.
When symptoms are mild to moderate, people with fibromyalgia often find day-to-day living can go on as normal, providing they receive the appropriate treatment. Severe symptoms, on the other hand, can affect people to the extent that holding down a job or having a normal social life seems impossible.

Where Does the Term ‘Fibromyalgia’ Originate?

Fibromyalgia is short for fibromyalgia syndrome, a syndrome being a collection of symptoms. The term is derived from the Latin “fibro,” meaning fibrous tissues; “my,” meaning muscles and “algia,” meaning pain.

Who Does Fibromyalgia Affect?

Fibromyalgia is a common condition that is estimated to affect around 1 in every 25 individuals globally. Although men may be affected by this condition, women are ten times more likely to develop it. In the majority of cases, symptom onset begins between the ages of 20 and 50 years and the condition is more common among older people, although children can also develop the condition.

The exact cause of this condition is not known, but experts suspect that fibromyalgia is the result of the brain and nervous system failing to process pain signals in the usual way, causing the pain to become amplified. In some studies, brain scans have shown altered pain processing in individuals with fibromyalgia. Researchers have also found deficient levels of serotonin in the nervous system and subsequent imbalance in a spinal fluid involved in pain signaling.
Usually, people only experience pain when the body is subjected to direct injury or damaged by a condition such as arthritis. In fibromyalgia, the pain is not the direct effect of such damage or injury to the body part where the pain is felt. Since the pain seems to be the result of pain signals from the affected area being processed differently, rather than a result of direct damage that can be treated, it is difficult to stop and the condition is therefore chronic.

Currently, there are no specific tests for diagnosing fibromyalgia and many individuals with the condition have normal blood tests, X-ray and scan results. However, a doctor may still want to perform these tests to eliminate the possibility of other conditions that may be causing the symptoms.
Until recently, diagnosis was based on tenderness in certain body parts, but in 2010, guidelines were updated advising that the following should be taken into account:

There is no cure for this painful condition and management is aimed at reducing and alleviating the symptoms and improving general health as much as possible. Various medications are available that can help to reduce symptoms and self-management techniques such as exercise, relaxation techniques and stress management can also be beneficial.
Fibromyalgia does not cause any permanent damage to the fibrous tissue but keeping healthy and active can help the muscles stay in good condition and prevent any problems that otherwise weakened muscles may lead to.
Examples of treatment strategies are described below:
Medication: Several over-the-counter pain relievers may be helpful and doctors sometimes prescribe a pain killer. Antidepressants may be prescribed, since they help to reduce pain, as well as depression. Anti-seizure therapies for the treatment of epilepsy are often also effective at reducing some types of pain.
Therapy: The different forms of therapy a person may recommended include physical therapy to help strengthen muscles and improve stamina; occupational therapy to help make a person’s working environment or the way they carry out tasks more comfortable and cognitive behavioral therapy, which aims to boost self-confidence and teach stress management and coping techniques.
Alternative medicine: Various forms of alternative medicine including acupuncture, massage and yoga can all be effective at relieving stress and reducing pain.
Exercise: Regular exercise that is gradually increased over time can alleviate pain. Walking, swimming and cycling are often recommended. Stretching and relaxation exercises can also be beneficial.
Getting enough sleep: People with fibromyalgia are advised to practice good sleep hygiene by avoiding sleeping in the day time and ensuring their bed time and wake up time are kept the same everyday.