In a move swift and sudden, yet long prepared, the opening page of our civilizational code-book, containing the basic premises of our human identity, has been torn away:

So God made man in his own image,
in the image of God he created him;
male and female he created them.

Not so! Some time ago, we were told that man was not made by God but only by the forces of nature, a nature having no creator. More recently, we were told that male and female are not the cardinal categories we thought they were, and that we should think instead in terms of heterosexuality and homosexuality. Now we are told that these unbalanced binaries – with the noxious patriarchy and heteronormativity they inevitably produce – must give way to a new template altogether.
There must be a different kind of thinking, not determined by such considerations at all. Instead of finding in our sexed bodies a basis for our identity, we must discover that basis in something asexual, something strictly mental or volitional. We must find a source of identity purely in our heads.
I have been observing this onslaught on human identity for a good while, tracking the political and legal strategies it has pursued. Recently I have made some effort to trace its philosophical roots back as far as the early part of the second Christian millennium, for such dramatic alterations to human self-understanding do not just appear out of the blue. That is not what I want to talk about here, however. Nor is the real and present danger it poses to freedom of speech and to the exercise of conscience and religion. I want rather to tackle the gender ideology that presently drives it.
“Gender” used to be a fairly straightforward term, with just two meanings. First, it was a synonym for sex; one’s gender simply was one’s sex. Second, it contained a reference to the cluster of assumptions in a given society about how each of the two sexes functions; hence, one spoke of “gender expectations” and the like. These meanings have not completely disappeared, but they are steadily being rubbed out and replaced by notions of “gender identity” and “gender expression.” Gender, as used here, has a third meaning – a meaning that to most people is mysterious and quite opaque.
It is not just the lack of any definite referent or guide – reproductive organs, for example, or specific role models – that makes it opaque. Rather, it is the deliberate coyness about definition. Sam Killermann, marketeer of that popular cartoon curator of gender ideology, the Genderbread Person, is unusually forthright about the fact that gender, in this sense, defies definition. “It is a bit of this, a dash of that.” The lack of definition is all part of the fun. The mystery is the message.
Where gender is defined, however, the definition will look something like one currently employed at McGill University. Gender is “the sense of self (identification) of a person, and how they relate to (or don’t relate to) societal norms of femininity, masculinity, or any mix thereof.” So is this third meaning of gender simply a private, subjective counterpart to the public or social sense of gender that is specified by the second meaning? Is G3, as I call it, just one’s personal reaction to societal norms?
We might suppose so. That hypothesis does little to clarify the matter, unfortunately, for it generates two more mysteries. The first is why we would use the same term to identify our responseto something as we use to identify the thing itself. That seems rather perverse – unless of course we are trying to rub out the thing itself. The second is that gender, so defined, is virtually indistinguishable from gender identity, which suggests that we are trapped in some infinite linguistic loop.
Male, female, whatever
Let me explain. The Ontario Human Rights Commission defines gender identity as “each person’s internal and individual experience of gender.” More expansively, gender identity “is a person’s sense of being a woman, a man, both, neither, or [of being] anywhere along the gender spectrum.”  But how can gender identity be one’s individual experience of gender – that is, one’s sense of being a man or woman or whatever? Isn’t that what gender itself is, in this third or subjective sense?
In this loop we meet the first mystery all over again. Gender remains undefined. We also meet something still more puzzling, something hinted at by the “whatever.” What exactly are we identifying ourselves in relation to, if our identity might or might not have anything to do with being male or female, or even with some putative spectrum between male and female? I’ve been musing on that, and enquiring of others. I’ve yet to receive a coherent response. Where gender or gender identity is, is clear enough. It’s in your head, as the Genderbread Person says. But what is it? Can anyone say? 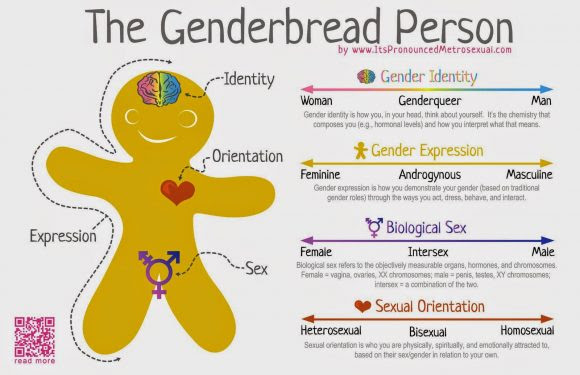 There is a further mystery, then, a political mystery, that we should by no means overlook.  Why on earth are we re-writing our laws and policies to take account of something we cannot specify? Why are we trampling all over well-established rights in our haste to create new and conflicting “rights” to something we don’t understand? Why, for that matter, are we trying to reconstruct societal norms based on how people do or don’t relate to norms?
Why, when we don’t know any more just what gender means, are we tying ourselves in collective knots about it, like a character in some comedy sketch who, desperate for the loo – but which loo? – contorts his body to keep from peeing his pants? Why indeed are we mutilating bodies, bent on making appearances contradict chromosomes, when we’re not even sure that bodies have anything to do with what we’re after?
I’ll tell you why, or at least some of the reasons why, and I’ll even tell you what I think G3 actually is.
The method in the madness
First, we’re doing this because we’ve been practicing “safe sex” for a generation now – just long enough to forget what sex is and what primarily it is for – and because safe sex, as Daniel Moody has observed, breeds “safe spaces,” where we are permitted to forget what the mind itself is for. Otherwise put: the price to be paid for suppressing the truth about bodily union, the truth that sex is both unitive and procreative, is a loss of grip on truth as such. We are the self-sterilizing generation, and our willful sterility has senility as its reward.
Second, we’re doing it because we’ve been traveling for so long on the road to a utopia called Autonomy, without ever arriving, that we’ve begun to turn even against our own bodies, in hopes – quite vain hopes, the various enthusiasms of our transhumanists and transgenderists and euthanasia advocates notwithstanding – of entirely mastering these stubborn reminders of heteronomy.
We pamper our bodies, but we have become resentful of them. We rebel against their limitations. And having practiced such mastery as we can manage on the bodies of others – especially, when safe sex fails, our unborn babies, who have borne the brunt of our resentment – we are now ready to practice it on ourselves.
Third, we’re doing it because, as Solzhenitsyn and John Paul II tried to remind us, we have forgotten God. That is the deepest, most fundamental reason why we no longer know who or what we are and why we cannot accept our limits. It is the most basic reason why we are being alienated from our bodies. It is also why we can’t tell the difference any more between passion and compassion, why we fancy we are doing good when we are actually doing evil, why we suppose we are liberating ourselves when in fact we are depriving ourselves of anything given, anything solid or stable, as a foundation for identity.
There are other reasons, and other consequences, but spelling it all out is a project for another day and a much larger space. I promised to crack the code, to identify G3.  What is G3? It is the volitional self in its aspiration to absolute authority over the bodily self. That, alas, is an aspiration which cannot be fulfilled by the volitional self that is not properly subject to reason, and ultimately to God. It is, as we theologians say, an eschatological aspiration that is best not attempted on a do-it-yourself basis.
Use ze or zir – or else
What, then, is gender identity? As I wrote in a recent essay in First Things, gender identity “is simply the story the self tells itself about its body, the story that through ‘gender expression’ it tries to tell the world.” And how should I regard that story?  I am asked these days to show it absolute deference, no matter whose story it is and no matter how unconvincing. I am even told, by the more radical devotees of gender ideology, that I cannot speak publicly about such things if I don’t. That, too, seems a mystery at first glance, but it isn’t. There is a good reason for the stricture, and (let the reader beware) for its rigorous enforcement.
The reason is this:  Since the story has no possible verification but self-verification, the public sphere collapses the moment I say I don’t accept it. For there is nowhere to turn, no common reality to consult, in order to mediate such a dispute. No public sphere remains, once we have left the body behind and invested everything in the privacy of our minds.
dWe are truly those of whom Nietzsche spoke, when he said that we have sponged away the very horizon of our lives, without realizing what we have done or having any idea what we shall do next. Having deprived ourselves of God, we are busy depriving ourselves of any meaningful political or social life. Even the most obvious facts on which such a life might be based are ruled out as inadmissible evidence.
Now if there is any hope for us, and there is, it is precisely a Lenten hope.  So I propose a Lenten fast, a refusal to play the gender game; a giving of alms, in acts of love for those caught in that game; and a prayer, a prayer for a civilization declining into senility at an alarming rate: “O God, who made us male and female, come to our aid. O Lord, who alone art self-verifying, make haste to help us!”
Douglas Farrow is Professor of Christian Thought at McGill University. Originally published on C2C Journal. View the original article.
- See more at: https://www.mercatornet.com/conjugality/view/cracking-the-gender-code/19579#sthash.1dVgBO1m.dpuf


We have published a fair bit about that hot topic, gender, in recent months and I have read it all but, frankly, I would be hard pressed to give a definition of the term as it is currently used. Ridiculous, isn’t it, that an averagely intelligent person cannot learn the definition of a word that leaps out from every page on the internet, every day.
But there is a good reason for my learning difficulty, as Douglas Farrow explains in an extremely helpful article today: it’s because the meaning of the term changes with every person who uses it. In other words, there is no definition in any normal sense. Or there wasn’t, until Dr Farrow, who is Professor of Christian Thought at McGill University in Canada (that gender wars frontier), invented one that really captures the whole gamut of meanings. To find out what that is, get yourself a cup of tea and read the article.
There’s other great reading today, of course, but the short piece by Maurice and Jane Watson, an Australian couple, on 5 keys for a happy marriage, is very nice and practical.