Protect Children this Flu Season: Get a Flu Shot! 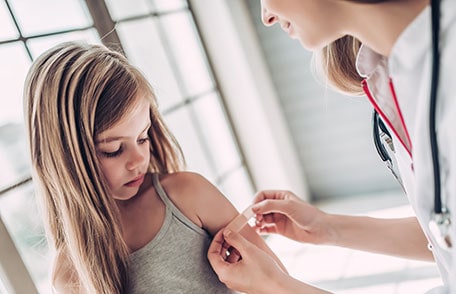 Did you know that children are more likely than adults to get sick from flu? Your child is likely to be exposed to flu in a classroom or daycare setting, and millions of children get sick with flu every season. It’s important to make sure that your child is protected this flu season, and the first and most important step is ensuring everyone in your family aged 6 months and older gets an annual flu vaccine. Remember that even healthy children can get sick with flu.
CDC recommends that everyone 6 months of age and older get a seasonal flu vaccine, this season with an injectable flu vaccine (flu shot). Vaccination is the first and most important step in protecting your family against flu. Each year, millions of children get sick with seasonal flu; thousands or tens of thousands of children are hospitalized and some children die from flu. CDC estimates that since 2010, flu-related hospitalizations among children younger than 5 years ranged from 6,000 to 26,000 in the United States. Since 2004-2005, flu-related deaths in children reported to CDC during regular flu seasons have ranged from 37 deaths (during 2011-2012) to 171 deaths (during 2012-2013). Last season, 109 deaths in children from the flu in the U.S. were reported to CDC, and CDC has already reported the first flu-related pediatric death for the 2017-2018 flu season, even though the season is just beginning.
Flu vaccination can prevent illness, hospitalization, and deaths in children. There are many studies that show that flu vaccination reduces the risk of flu illness and hospitalization in children, and in 2017, a study in the journal Pediatrics was the first of its kind to show that flu vaccination significantly reduced the likelihood of a child dying from flu. This study, which looked at data from four flu seasons between 2010 and 2014, found that flu vaccination reduced the likelihood of flu-associated death by half (51 percent) among children with underlying high-risk medical conditions, and it reduced the likelihood of flu-associated death by nearly two-thirds (65 percent) among healthy children.
The best way to protect your child this flu season is by making sure he or she receives their annual flu shot. It’s not too late for you and your family to get your annual flu shots.

As you get your family vaccinated this season, remember that some children 6 months through 8 years of age require two doses of flu vaccine for optimal protection from flu. Children in this age group who are getting vaccinated for the first time, or who have previously received only one dose of vaccine, should get two doses of vaccine this season. The two doses need to be given at least 28 days apart. For children who will need two doses of flu vaccine, the first dose should be given as early in the season as possible to allow time for immunity to kick in before flu starts to spread in your community. For other children, it is good practice to get them vaccinated by the end of October; however, getting vaccinated later can still be beneficial, as long as flu viruses are circulating. Ask your child’s doctor or other health care professional if your child needs two doses of flu vaccine.
Visit Children, the Flu, and the Flu Vaccine for more flu and flu vaccine information specific to children.

Flu Can Be Dangerous for Some Children

Flu may be more serious than the common cold for children. Flu symptoms can be severe and flu illness can lead to serious complications that require hospitalization.
Some children are at especially high risk of serious flu-related complications:
Flu vaccines are offered in many locations, including doctor’s offices, clinics, health departments, pharmacies, by many employers, and even some schools. You may not have to see your child’s doctor to get him or her a flu shot! There are plenty of locations available that provide vaccinations. The HealthMap Vaccine Finder is a useful tool for finding areas in your community offering flu vaccine.
More information for parents is available at CDC’s Flu Information for Parents with Young Children’s webpage. If you have questions about the flu vaccine for your child, make sure to talk to your child’s pediatrician or health care provider.
Publicado por salud equitativa en 8:09