Amniotic Band Syndrome describes a complex group of congenital conditions, which in the majority of cases affect the upper and lower limbs, but also the “thorax abdomen” axis or the head. Emilien is one of 70 children born with this condition every year in France.
Written by nfourrier, published 24 days ago. 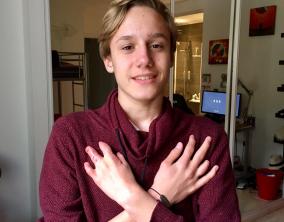 The condition was revealed in Emilien during the fifth month morphology ultrasound scan. That was also the day that our lives were turned upside down…
In the end, we learned that Amniotic Band Syndrome is benign compared to some other conditions (Without wanting to seem like it’s a competition of course…), but it allowed us to put a lot of things into perspective: the desire for a perfect baby, serious illnesses, and the meaning and value of life above all.
The roughly 70 children who, like Emilien, are affected by Amniotic Band Syndrome every year in France weren’t of interest to a lot of people, apart from their loved ones… That’s the conclusion which we rapidly came to when searching for information on the internet before he was born. OK, so 2002 was almost prehistoric for the web, but it has to be said that things haven’t changed much in 2017. Social media has perhaps improved things a little in terms of making contacts between patients and/or parents, but it’s still not ideal.
Since 2002, we have continued, however, to receive about 20 e-mails a year from people looking for information via our website: www.brides-amniotiques.com
Emilien has undergone 8 operations in total and he decided that the most recent, in 2016, would be the last. Most of the procedures were designed to improve his motor functions (Emilien was born without a thumb on his left hand) and also his legs (His left foot is often painful, and since he was born, he has had to attend at least 40 physiotherapy sessions per year). The psychological aspect was quite complicated to deal with as well: for a long time, Emilien has felt an intense anger, to the point where some medical examinations, however benign (A simple X-ray for example…) became an ordeal. It was hard to cope with how different he felt as well: starting high school was a difficult time to get through, but in the end he managed to reconcile the fact that he had to “educate” others about his condition, do his school work, explain and also know to say stop when he had had enough.
Today, Emilien is 15, he is going to return to school (at “seconde” level, the equivalent of tenth grade in the US) with a completely normal timetable, he plays the drums, and he plays video games like a lot of other teenagers his age. He is “almost” normal. It’s very likely that he will take over from us in continuing to increase awareness of this rare condition: he will tell people in his own words.
We have tried to raise Emilien to be a well-balanced boy; aware of his differences, and despite everything, also aware of his strengths.
Written by nfourrier, published 24 days ago.