GENETIC TESTING IS NOT A LUXURY ITEM IN HEALTH CARE

PUBLICADO 26 SEP, 2016 15:20:40 POR AVRILDALY EN DEFAULT PÚBLICOESCRITO ORIGINALMENTE EN INGLÉS
0
I have worked as a patient advocate in the field of rare and genetic disease for 17 years. I am neither a scientist nor a medical professional, just a person diagnosed with a genetic form of retinal disease in 1998. As a communications professional I became involved as I wanted to highlight the unacceptable delays in the diagnostic journey, the impact on individuals and families and also on those who struggle to provide support and care within the health care system.
Prior to my being thrown into a world where the term ‘genetic disease’ referred to me, it had conjured up images of science fiction movies and TV shows, Gattaca and Chimera, Dolly the sheep and of course news reports of genetically modified potatoes. It was not in my everyday lexicon but it quickly became a word that was uppermost in my thoughts.
A clinical diagnosis of a genetic form of degenerative vision loss – Retinitis Pigmentosa (RP) was delivered to me by my ophthalmologist, Dr Paul Kenna at the Royal Victoria Eye and Ear Hospital, Dublin. Fortunately for me, Paul’s use of words and his answers to my many (many) questions were thoughtful, yet informative and hopeful. He told me about the world leading research on going in Trinity College Dublin, funded by the patient led charity Fighting Blindness. Here, scientists were working to find treatments and cures for Inherited Retinal Diseases (IRDs). It was comforting to know that I was not alone in this journey and that much work was being undertaken at home and abroad to fight these vision stealing conditions. 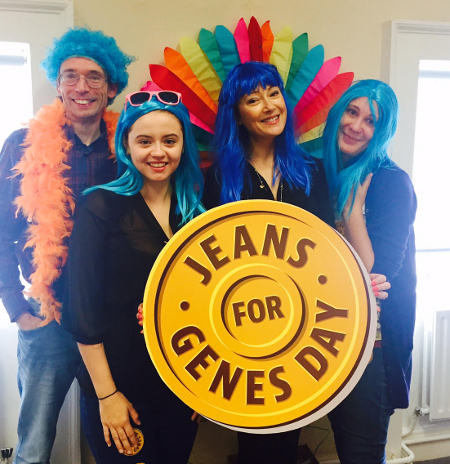 '''
Avril (holding sign) with some of the Fighting Blindness team celebrating Jeans for Genes day 2016 in Dublin.
Eighteen years on and I still don’t know the gene that causes my RP. I have been blessed with one of the most complex genetic conditions that exist. There are at least 250 genes already described that cause IRDs, but this still only represents 60% of the total. It is likely that my gene is in the 40% and that’s ok for me. Someday it will be found, I still have good central vision and, thankfully, no one else in my family is affected. Most importantly, I had theopportunity to have a genetic test. Unfortunately this is not the case for millions of individuals and families as the lack of equitable access to a genetic testing and genotyping for all forms of genetic conditions remains a significant and it seems now a never ending problem.
A genetic test to discover which gene was causing my RP was carried out through the Target 5000 project funded by Fighting Blindness and this weekend the charity is shining a light on the importance of genetic testing while raising much needed funds through their#jeansforgenes2016 campaign. Many other charities that support those affected by rare and genetically inherited diseases provide similar services to patients who in some cases are waiting up to two years for a genetic diagnosis.
Why in 2016 is it incumbent on charities that rely on the goodwill of the general public to fund what is a critical service in any health care system? And why is clinical genetics still a niche area in so many countries when each one of us carries at least one genetic defect? I am Irish and in a country with under five million citizens, 300,000 people are affected by a genetic disease. Yet some are waiting up to two years for a diagnosis. This is utterly unacceptable.
Like so many other genetic diseases, due to the genetic characteristics of IRDs like RP, a good and reliable genetic diagnosis is a prerequisite for inclusion in the appropriate clinical trials. Genetic testing can have a positive impact on affected individuals and families in a number of ways. When properly performed, interpreted, and acted on, genetic tests can improve the accuracy of diagnosis and prognosis as well as genetic counselling.
Therapies that have the potential to treat IRDs are emerging and it is unthinkable that an affected person may not be in a position to access such life changing treatment because they have no way of accessing a genetic test. The experience of Inherited Retinal Disease is replicated in many other genetic disease areas. We are in an era of significant advancement in innovation with many therapies emerging yet decades of work by researchers and clinicians and the hope therapies emerging from this work bring rely on patient populations knowing their exact genetic condition and having access to registers that are well networked and sustainable.
National Plans for rare diseases have now been published in most European countries and much work has also been undertaken in Australia, Asia the USA and beyond. It is time for the reports to be taken from the shelves and their recommendations implemented. It is time for those who develop health care policy to understand that a genetic test is not a narcissistic luxury item. It is not to discover ‘Am I descended from the Vikings or the Aztecs?’ It is to understand conditions that affect millions of people worldwide, to monitor their prevalence in to order develop pathways to appropriate care.
We will all benefit from better strategies for the delivery of genetic testing and resulting services. The patients who have the potential to receive life changing treatments, the clinicians who will deliver better care, the scientists who develop innovative therapies and the national health systems who can coordinate multidisciplinary, well networked care. Society as a whole will benefit by having more people who can live full and independent lives and contribute in every way possible to a brighter better future for all.
The time really is now.
Saturday September 24th is World Retina Day and Retina International is urging the global retina and rare disease community to advocate for access to genotyping services that will expedite the development of therapies for unmet need.
Avril Daly is CEO of the patient led global umbrella group Retina International. She is Vice President of EURORDIS – Rare Diseases Europe and Chair of the Genetic & Rare Disorders Organisation – GRDO.
Publicado por salud equitativa en 11:11