What a fish tank can tell us about divorce

What a fish tank can tell us about divorce

An upward blip in British divorces hides a much more positive trend.

Imagine an enormous fish tank. In it are fish of all different sizes, all swimming around happily together.
It’s easy to tell how long any particular fish has been in the tank because of its size. As fish mature, they get bigger. The bigger fish have been around for a long time. The smallest ones are the new arrivals. But they all swim in the same tank together.
Now move your eyes upwards to the top of the tank where there is a giant tap, through which pours a steady stream of fresh young fish. These are the new arrivals, minnows. You can watch them quickly mixing in to the general melee within the tank.
As your gaze drops down to the bottom of the tank, you see a giant plughole, out through which pours a stream of fish of different sizes. Most are fairly small. But there are bigger ones leaving the tank as well.
What this fish tank represents is marriages. Each fish represents one couple, its size reflecting their length of marriage to date. The tap at the top is where newlyweds enter the tank. The plug at the bottom is where divorces leave the tank. The tap at the top – marriage rates – pours in new fish at roughly twice the rate that the plughole at the bottom – divorce rates – sucks fish away. You should be able to see now why there’s no direct connection between marriage rates – the smallest fish – and divorce rates – fish of all different sizes.
Official stats highlight what's going down the giant plughole
Last week, the Office for National Statistics announced that there were 6 per cent more divorces in 2016 compared to the previous year. That’s 6 per cent more fish disappearing down the plughole.
But for those of us looking for the overall trend, knowing that a few more fish left last year doesn’t tell us whether this is because more fish of all sizes are leaving (divorces are up across the board) or because there’s a sudden rush for the drain by more of the smaller or bigger fish (divorces  up among newlyweds or longer marriages).
Alternatively, maybe there are simply more fish in the tank this year. Who knows.
I hope my fish tank analogy helps you see the problem. Merely counting the fish that go down the plughole each year tells us not very much about divorce rates.
So what we do at Marriage Foundation is divide the big pool into lots of little pools.
Within each little pool, all of the fish are the same size because they represent all of the marriages in one given year, whether 1970 or 1985 or 2008. The good bit is that if you ask ONS nicely, and pay them a small fee, they will tell you how many divorces happen for each year of marriage.
Now we can keep track of how many fish leave each of these little pools. By dividing up the fish by size, or year of marriage, we can get a really clear picture of the trend. We can look at the newer tanks and see how newlyweds are faring. We can also look at the older tanks and see how the longer marriages are faring. And, crucially, we can compare how those newlyweds and older couples are doing compared to their counterparts in the next door little fish tank!
Whereas the overall headline gives us fairly useless data on divorces by “year-of-divorce” –  the giant plughole – looking at divorces in their individual tanks, by “year-of-marriage”, gives us a very clear idea of the trend in divorce rates.
This is how we have found out that:

So what about this year’s rise in divorce?
Buried away among the new divorce stats (so well hidden that they aren’t even on the main website), ONS report a very limited summary of data on how long the latest batch of divorcees have been married. Because the pattern of divorce rates is so well established, I can extrapolate from these numbers with confidence, and thence update each of my fish tanks accordingly.
Here’s what is really happening: 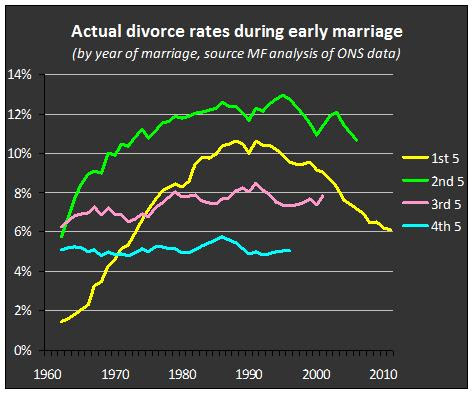 Next time you hear a commentator claiming that “divorce rates are up” because of Brexit or economic worries or some other made-up reason, you can tell them about the fish.
The young fish are doing just fine.
Harry Benson is the Director of the Marriage Foundation in the UK. This article is reproduced with permission from the Marriage Foundation blog.


Among our latest articles: Revelations about Russian operatives using Facebook to manipulate the American elections have prompted the claim that the platform’s founder and CEO, Mark Zuckerberg, is “the biggest dictator in the world.” Zac Alstin looks at the argument and finds that we may be giving away more than we get from this “free” service.

In a postscript to Halloween Michael Cook sticks up for zombie films, finding that “a number of strong positive qualities emerge from the genre,” including tips about survival skills. And our front page video reveals that, although 79 percent of Republicans and Democrats say they are not superstitious, polls find that at least half of Americans believe in ghosts, and three out of four believe in at least one kind of paranormal phenomenon.

And Pope Francis delivers a brilliant speech to a conference on (Re)Thinking Europe: a Christian Contribution to the Future of the European Project, sponsored by the Commission of the Bishops' Conferences of the European Community. “The first and perhaps the greatest contribution that Christians can make to today’s Europe is to remind her that she is not a mass of statistics or institutions, but is made up of people,” says Francis.

Towards a Europe of persons, not statistics
By Pope Francis
Excerpts from the Pope's brilliant speech on the future of the Old Continent
Read the full article

What a fish tank can tell us about divorce
By Harry Benson
An upward blip in British divorces hides a much more positive trend.
Read the full article

Is Mark Zuckerberg the biggest dictator in the world?
By Zac Alstin
Trump, Russians, and the fallacy of ‘free’.
Read the full article

The lust for power led to Rome’s decline and fall
By Lawrence W. Reed
Gaius Marius and the betrayal of the Republic.
Read the full article

Mothers need to ‘be there’ for their babies
By Carolyn Moynihan
But a New York psychoanalyst’s message gets the media cold shoulder.
Read the full article

US aid will finally go to persecuted Christians
By Sheila Liaugminas
So declares a resolute Vice President Mike Pence.
Read the full article