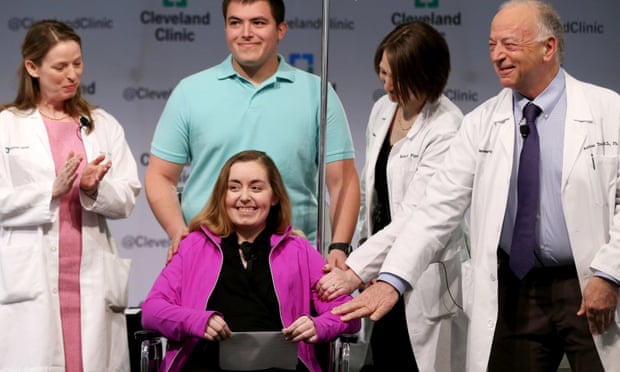 The first womb transplant to take place in the US has failed – under dramatic circumstances. The recipient of the transplant, who was operated on last month, appeared smiling and healthy with doctors at a media conference on Monday. Yet just a day later there was a sudden complication that required specialists to remove the transplanted uterus.

The clinic released a statement on Wednesday about the emergency operation:

“There is a known risk in solid organ transplantation that the transplanted organ may have to be removed should a complication arise. The medical team took all necessary precautions and measures to ensure the safety of our patient.”

The woman, known only as Lindsay, said she was recovering well after the womb removal:

“…Unfortunately I did lose the uterus to complications. However, I am doing okay and appreciate all of your prayers and good thoughts.”

The Cleveland clinic is set to perform another nine uterus transplants as part of a pilot US study into the procedure. Two other hospitals, Texas’s Baylor University and Boston’s Brigham and women’s hospital, will also participate in the study. Doctors in Sweden have already performed a number of successful uterus transplants, resulting in the birth of five healthy babies.
- See more at: http://www.bioedge.org/bioethics/first-us-womb-transplant-fails/11792#sthash.KoU7Srhv.dpuf

I must confess that one of the most difficult things about editing BioEdge is that it is difficult to compose punny headlines. Any editor worth his salt wants to sprinkle a publications with puns. The Economist’s sub-editors are masters of the inobtrusive pun. I recall fondly a story about hallucinogenic mushrooms which was headed “Fungi to be with”.
However, there is such a thing as taste – and ethics -- and puns over most of our stories would be either morbid or ribald. That’s one reason why I am looking forward to more developments with CRISPR. Some day I’ll be able to use “Ethics on gene editing CRISPR but no clearer” or “CRISPR holds promise of abundant fruit”. Sooner or later “Belgian govt’s waffle on euthanasia slated by ethicist” will come true. Or “Cloned baby to be named John-John.” Or “Euthanasia law comes into effect today” – but you need to be Australian to appreciate that one.
This is the kind of thing I think about a lot. So I was dismayed to read that bad puns may be a sign of a degenerative brain disorder. A new paper in the Journal of Neuropsychiatry & Clinical Neurosciences describes two patients afflicted by “intractable joking.” One was dragged along to the doctor by his wife because he kept waking her in the middle of the night to regale her with new puns he had just composed. The other lost his job after asking “Who the hell chose this God-awful place?” Scans showed that both had experienced damage to the right hemisphere of the brain.
I suppose their experience can be summed up in the old joke: “They laughed when I said I was going to be a comedian. Well, they’re not laughing now.”  Any ideas from readers about puns for bioethicists?