MercatorNet: How the #changeroomproject isolates people

MercatorNet: How the #changeroomproject isolates people

How the #changeroomproject isolates people 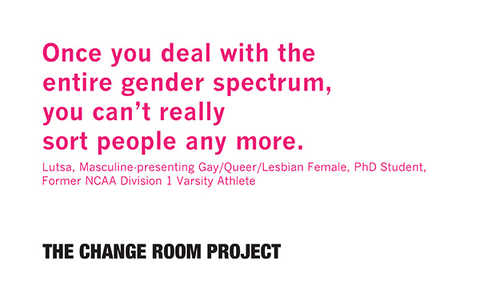 I was just a teenager when I began swimming at Hart House, a University of Toronto athletics facility. My dad was a member and he would take my sister and I to do laps. To get into the locker rooms, there were no controls, no cards, no desks and no questions. My dad would turn left down a hallway into the men's and we would turn right and go into the women's. We would meet at the pool, and other patrons did the same.
When they finally put a little desk up in the corridor to control entry into the women's change room, it wasn't to keep teenagers out. It was, as I recall, because men had been found sneaking into the women's lockers. Now, my sister and I would walk by a desk with a bored student sitting there, deliberately controlling for only one thing: our biological sex.
Fast forward to today's "Change Room Project", an art installation in the same hallways and locker rooms of Hart House that seeks to enhance safe spaces on campus by diminishing the differences between the biological sexes. The exhibition, which I experienced recently when I went for a swim at my alma mater, is a collection of quotes describing the vulnerability LGBT people feel in locker rooms.
Statements like the following are hung on the walls of the locker rooms:
Tension and feeling out of place are certainly unpleasant. That said, a couple of points spring to mind.
One is that there isn't any actual danger to be found in change rooms that does not stem from ignoring biological difference between the sexes. Safe spaces are found where we respect and realize these differences.
When we see cases of harassment, of peeping toms, of physical assault, and worst of all, of rape, these are crimes that in the main are perpetrated by biological males against biological females. There are very few examples on public record to the contrary.
Comfort and an absence of tension cannot trump privacy and safety. The Change Room Project notifies the public of a certain internal malaise, while regrettably dismissing those who have experienced real aggression as itemized above. They are, in a way, asking for the impossible: people with alternate genders are to be both unnoticed and noticed. We are to make special allowances for a minority who are different, yet who simultaneously claim they are absolutely no different, that they "should be here."
In reality, there are any number of distasteful aspects of locker room life, for everyone. There's the stranger who wants to chit chat while changing, the person who drips a wet suit across the span of the floor so that dry socks get drenched and the person who chooses, apparently, to never wash gym clothes.
But aside from slipping on a wet floor, none of that is dangerous.
Another point would be that the Change Room Project creates difference where there need not be. By singling LGBT people out for their insecurities, the Change Room Project isolates them. It paints a false picture of a happy camaraderie in the locker room for everyone else, as if opening the door leads heterosexual people into some kind of Narnia.
I hasten to add I do not think people with alternate gender identities are dangerous. The problem is that we have no way but biological sex based on appearance—what we can see—with which to control entry for those folks who truly do seek to do harm. 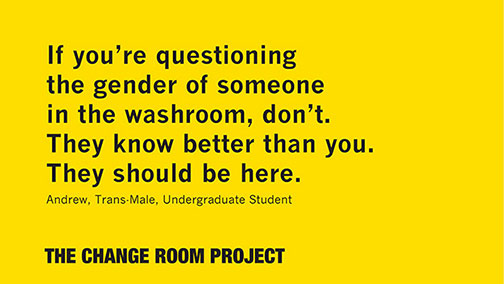 Yet another problem the Change Room Project exposes, like a crack in the shower tiling, is the loss of shared identity between people. With this project, we can assume nothing about anyone. We are in process to lose the very basic concepts of "he is a boy" or "she is a girl," and with that, we are in process of losing the ability to communicate. This leaves us all the more isolated from each other.
The Change Room Project will come down this month, in April. Kind folks never needed it, and unkind folks won't heed it. It's a project that wanted to draw attention to vulnerabilities, but in so doing, actually isolated people more. It's a sad statement on an art installation that hoped to illuminate and unite.
Andrea Mrozek is Program Director of Cardus Family. This article originally appeared at Cardus, a think tank dedicated to the renewal of North American Social Architecture, and is reproduced here with permission.
Read the original article.
- See more at: http://www.mercatornet.com/conjugality/view/how-the-change-room-project-isolates-people/17862#sthash.lCgyHMsI.dpuf

In his piece on the LGBT bullying of the Dominican Republic by the US through its gay ambassador, Michael Cook references a White House blog post in which "Eight of the nation's most powerful out leaders, including ambassadors and an envoy to the State Department, explain how proposed trade agreements will export our values of equality and tolerance."
It's quite an eye-opener. It explains how "new trade initiatives"including the Trans-Pacific Partnership (TPP)" -- which the New Zealand government, for one, has signed up to and is busy right now explaining to a sceptical citizenry -- are doubling as means to export "values", a weasel word for LGBTQ etc cultural norms. They won't have much work to do in our country, where politicians have already bent the knee to gender ideology, but they are ready to ready to use neo-imperialist tactics on culturally conservative countries like the Dominican Republic. At that rate Mexico should welcome Trump's "wall" -- to keep the Americans out.