MercatorNet: The Walls are Talking

MercatorNet: The Walls are Talking

The Walls are Talking

What does abortion do to the hearts and minds of those who regularly carry it out? 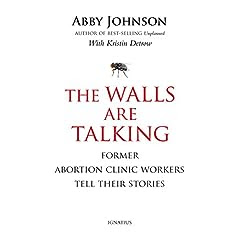 Whatever the political upheavals in the last few weeks in the UK, it is safe to say that changing the law on abortion will not be on the agenda of Theresa May’s newly-formed government. It is too divisive an issue and abortion has become too entrenched in our culture. Aren’t the terms of the Brexit negotiations more important, after all? That is why books like this matter; they keep this highly politically incorrect issue in the forefront of people’s minds, reminding us that the fundamental law of a civilised society does not lie with trade agreements or political allegiances; it is about respect for life.

Abby Johnson, a former successful abortion provider for the US-based company, Planned Parenthood, became famous in 2009 when she left her job and became pro-life. It was during that year that for the first time she watched a 13-week-old pre-born baby lose its life during an ultrasound abortion. It changed her outlook forever as she came to realise that, in focusing on the dilemmas faced by pregnant women at her Texan clinic, she had deliberately ignored the reality of the baby involved.

Her book is a compilation of stories told to her by former clinic workers. It is not for the squeamish – but then neither is abortion itself. Respecting the anonymity of her collaborators, Johnson demonstrates time and time again that the abortion industry is not about “compassion” for the women involved, but about making money – lots of it. “Every woman who walks out of the clinic and chooses life for her child equates to lost revenue”, as one former clinic worker relates.

One former worker relates the harrowing story of an affluent young married couple who were expecting twins –their first babies. They chose to abort them at 16 weeks because, having done some research, they decided the twins “did not fit their lifestyle.” As the narrator comments, “As long as the business is profiting, there will never be a reason too heinous to end the life of a baby at the request of its mother.”

One chapter relates the story of a young woman who changed her mind at the last minute and decided to keep her baby – but who was pressured by the clinic to go ahead with her abortion; so much for “choice” in this instance. Another tells the case of a woman whose baby had died naturally in the womb, but who wasn’t told this by the clinic so that her “abortion” could go ahead, they would collect their fee and she would always think she had aborted her baby. In this case, only the vigilance of the receptionist, who pointed out that nurses needed to check the baby’s heartbeat, stopped this particular fraud.

Readers learn the case of “Angie” who had had eight abortions already and who always seemed fairly blasé about the whole business. Coming to the clinic for her ninth “procedure”, for the first time she asked out of curiosity to see her dismembered baby on the petri dish, despite the clinic ruling that “It was of utmost importance that a piece of cloth shroud the jar containing the “products of conception” from the patient”. Angie insisted and was deeply shocked as she realised what she had done. “That was my baby” she whispered. She was refused leave to bring the remains home with her and “we never saw her again”.

Readers of the book learn that many clinic workers use their job status to have their own babies aborted for free at the clinic where they work. This helps to tie them emotionally to their work and to muffle their conscience. Johnson makes a strong case for appealing to pro-life supporters to “show up” at abortion clinics, simply to pray. Being judgmental of clinic workers won’t change them, she argues: “The prayers of the people outside were a big factor in my ultimately leaving the abortion industry”.

Johnson’s book raises in stark form a question generally ignored: what does abortion do to the hearts and minds of those who regularly carry it out? It deserves to be widely read and shared.

Francis Phillips writes from Buckinghamshire in the UK.

Identity politics – in particular those concerning sexual identity -- cast a growing shadow over the world, influencing personal relationships, public policy and even laws. More and more people fall in with the claims of activists about rights and science or simply the “I want” of individual choice.
However, as psychiatrist Richard B. Corradi explains with great clarity and elegance, many people are falling for this aggressive ideology partly because they have missed out on life experiences that are key to the development of their own identity. Broken families and missing dads play a very large part in this trend.
What should happen in a stable nuclear family you can read in Dr Corradi’s essay, which I strongly recommend. It will strike many readers as familiar, if not just plain common sense. But how much of that do we hear on the subject of “identity” these days?
Last thought for the week: Americans - do you have a problem with the future leadership of your country? There is a solution -- Inishturk. See our front-page video if you have not already.